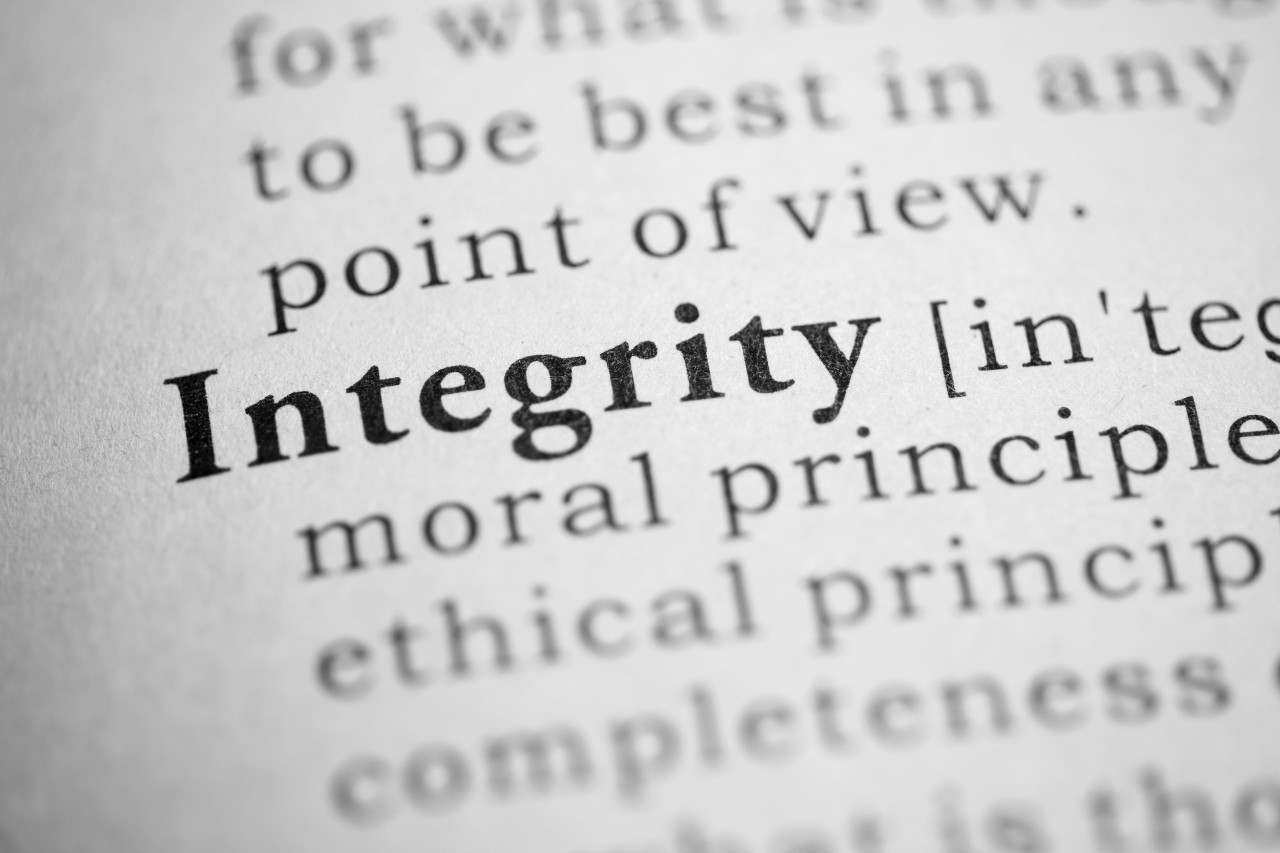 I did a search on “what characteristic do most people want in a leader?”.  Not unexpectedly, integrity was the single trait that appeared consistently at or near the top of the list – whether put together by the illustrious Forbes or the myriad of organisations, government bodies, academics or leadership coaches out there.  In my experience, every business seems to have integrity as one of its hand full of core values.

So, what does integrity mean?

Once again, my search for a definition presented me with some food for thought.  Integrity is the state of being whole and undivided.  If one looks at the origin of the word, this makes a lot of sense.  It stems from the French intégrité and the Latin integritas from which we also get the words entirety, integral, and integrate.  It’s synonymous with words like unity, wholeness and cohesion.

What this led me to realise is that integrity is so much more profound than honesty.  It also made me understand better the use of the term data integrity.  It’s all about being consistent, integrated, holistic.  What you promise is what you deliver, what you expect is what you get – every single time!

What are the components to be integrated?

Both Ethics and Morality are standards of right and wrong, good and evil.  The difference is that Ethics are what a person says they believe to be right.  Morality on the other hand is what they actually do.  One is aspirational, intended or wished-for whilst the other is acted on or carried out.

Psychologists use a term called personality disintegration.  Whilst not professing to be an expert, again my search engine came to the rescue with a definition.  The American Psychological Association Dictionary describes it as “fragmentation of the personality to such an extent that the individual no longer presents a unified, predictable set of beliefs, attitudes, traits, and behavioral responses. The most extreme examples of disintegrated, disorganized personality are found in the schizophrenias.”  To disintegrate means exactly as the word suggests.  Break up, lose cohesion.

So how does it play out in practice?

Given ethics are the standards, my sense is that they form the benchmark.  Clarity and agreement on what is right and wrong forms the basis against which we can measure someone’s behaviour and hence their integrity.  For Christians, these standards are defined in the Bible.  Other religions provide similar benchmarks against which to assess consistency of behaviour.  One could argue that in a country with a robust legal system, the standards are defined in the law.

The problem comes when we try and measure someone’s integrity against our own ethical standards.  If we don’t have common ethics, the exact same moral compass, what is perceived to be integrity will vary too.  Whilst there are some seemingly obvious measures that we’d all subscribe to, they may not be as clear as we think.  What about “Do not steal” – have you ever taken some office stationery home for the kids.  Or “Do not lie” – what about the little white lie you told last week, after all it was in order not to hurt his feelings? Just yesterday, did you do what you said you would?

So how can you as a leader act with integrity?

The more I thought through this, the greater the difficulty I had in coming up with an answer.  The first conclusion I did come to is that it is extremely difficult to assess the integrity of another person with any level of certainty.  We may be able to assess whether they are behaving in line with how they say they should or intend to.  But it would be unfair to see someone else’s behaviour and judge them against our ethics, unless they have committed themselves to a shared set of standards.

What we can do is take responsibility for our own integrity.  Be clear on the ethical standards that we have bought into and act consistently in accordance with them.  If we do this, we will lead integrated lives, where the pieces are together in a unified whole and our lives can be deemed to be wholesome.  One could say then we’d have it all together.

WHAT'S ON YOUR SIZZLE REEL?

LEADING IN A GLOBAL CONTEXT